While working on my first book, I considered myself an “accidental novelist.” Until then, I had never written more than college papers and business documents. When a friend insisted I write about a long-kept family secret, I took up the challenge. I eventually wove the story into an award-winning debut novel, Father’s Troubles, (MidAtlantic Highlands Press, 2003.) Upon publication, the novel was named a ForeWord Magazine Finalist for Historical Fiction.

Father’s Troubles, a double time-frame period piece, is set in Depression-era West Virginia. It takes a thread from my family’s past and weaves it into a novel that explores the family damage caused by keeping secrets. In an attempt to overcome his humble beginnings, bank president and real estate tycoon Lawrence Burgher lets his greed and arrogance overrun his better judgment as he engages in financial corner cutting. His self-indulgence lands him in prison and his family in such disgrace that they develop a cloak of secrecy in which they shroud the next generation for over forty years. The truth about what caused Father’s troubles finally surfaces because his granddaughter, Maggie Malone, refuses to let drop a remark her mother makes one summer afternoon.

The novel interlaces Maggie’s search for the truth of the family myth with her grandfather’s rags-to-riches to tragic-death saga. The juxtaposition of the contemporary and period stories shows the powerful impact this well-kept secret had on the entire family, but more importantly on Maggie’s own troubled relationship with her mother. Told partially through the immediacy of letters, the tale carries the reader across the decades to an emotionally satisfying ending.

“I loved reading this novel. The author is a born story-teller, and her ability to establish place, create character, and maintain suspense…made this one of the best books I have read since my discovery of Paul Bowles some fifteen years ago. In my book, Father’s Troubles is a winner.”
— Virginia Spencer Carr, biographer of Carson McCullers, John Dos Passos, and Paul Bowles

“Carter Seaton’s Father’s Troubles is an engrossing, splendidly written story of family secrets played out against a background of time and change—a setting that has familiarity for everyone in various degrees of personal history. Richly peopled with memorable characters, this insightful book is a true accomplishment of craft and art. Epic in her scope, the author achieves something that few writers ever master—she stays on the theme-line in a manner that creates tension even though the reader pretty well knows what he/she is about to read in terms of outcome.”
― Terry Kay, author of To Dance with the White Dog, The Runaway, Taking Lottie Home, Bogmeadow’s Wish, and other books.

amo, amas, amat…an unconventional love story, (CreateSpace, 2011) set in Asheville and Atlanta during the mid-1980s relays the poignant story of Mary Cate Randolph, a southern gal who’s been looking for Prince Charming all her life. She thinks she’s found him in Nick Hamilton, the new tennis pro at her country club. He’s charming and intelligent, but not sexually aggressive. No wonder. It’s 1983 and unbeknownst to Mary Cate, a naïve homophobic, Nick is a closeted homosexual.The tangled web of love, deception, and discovery ultimately leads to Mary Cate’s transformation and realization that true love is far different from the fairy tale version. 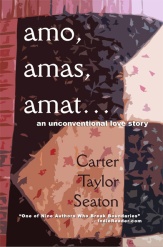 amo, amas, amat is available on Amazon at https://www.amazon.com/amas-amat-Unconventional-Love-Story-

For amo, amas, amat…an unconventional love story, I was named by Indie Lit as one of nine authors nationally who break boundaries.

This is is a brave and timely novel related to unconditional love and homosexuality.  It opens in the south in the early 1980s, the murky period of AIDS hysteria and gay bashing, and follows an evolving love story for eight years. (read full review)
— Phyllis Wilson Moore, The Charleston Gazette Book Festival blog

The wonderful message of this story comes from how Mary Cate develops a rich life without romantic love. This is a story with a wonderfully satisfying happy ending – as good as any romance, but entirely different from what the younger Mary Cate could ever have imagined.
— Meredith Sue Willis, author of Oradell at Sea and Their Houses

Hippie Homesteaders isn’t about coal or hillbillies or moonshine or poverty. It is the story of why West Virginia was―and still is―a kind of heaven to so many.

Hippie Homesteaders won Honorable Mention in the Culture Category of the 2015 Eric Hoffer Book Awards.  It also was chosen as a finalist for the Weatherford Award, as a category finalist in Biography by ForeWord Indie Reviews, and won the Ella Dickey Literary Award in 2018. Additionally, Hippie Homesteaders was chosen by ForeWord Magazine for a 2015 Honorable Mention Award in the Regional Adult Non-Fiction category.

Hippie Homesteaders is available at WVU Press: https://wvupressonline.com/seaton_hippie_homesteaders_9781938228902 or on Amazon at https://www.amazon.com/Hippie-Homesteaders-Crafts-Living-Virginia-ebook/dp/B00KIH5MPS or request it at your local bookstore.

“This book was waiting to be written and perhaps only Ms. Seaton could have written it. Her clear, direct prose is, perhaps, the only prose that is appropriate for this story. Her own creative background and her historian’s grasp and presentation of the details, moods and unrest of the times take the book far beyond a mere description of arts and crafts, providing a marvelous addition to the understanding of what makes West Virginians the people they really are. Ms. Seaton’s writing, like these people, is a treasure.”  Lee Maynard, author of the Crum Trilogy: Crum, Screaming with the Cannibals, and The Scummers and The Pale Light of Sunset.

The Rebel in the Red Jeep

Moving to a different genre for my fourth book, I wrote the biography of long-time congressman Ken Hechler. The Rebel in the Red Jeep (West Virginia University Press, 2017) covers the public servant’s one hundred years: from his birth on a vast Long Island estate through his years in Washington, to his retirement fighting against the destruction of the West Virginia mountains he adopted as home.

This biography recounts a century of accomplishments, from Hechler’s introduction of innovative teaching methods at major universities, to his work as a speechwriter and researcher for President Harry Truman, and finally to his time representing West Virginia in the US House of Representatives and as the secretary of state.

In West Virginia, where he resisted mainstream political ideology, Hechler was the principal architect behind the Federal Coal Mine Health and Safety Act of 1969 and constantly battled big coal, strip-mining, and fellow politicians alike. He and his signature red Jeep remain a fixture in West Virginia. Since 2004, Hechler has campaigned against mountaintop removal mining. He was arrested for trespassing during a protest in 2009 at the age of 94. He died in 2016 at the age of 102.

“A superb biography of a West Virginia icon. Carter Seaton has done a wonderful job capturing the essence of Ken Hechler.”
Jean Edward Smith, author of Bush, Eisenhower in War and Peace, and FDR

In 2018, I finally published a collection of stories I’d told my children and grandchildren. Now, I decided,  was the time to write them down for my great grandchildren and for the child that resides in all of us.

Set in those halcyon days of the 1940s and 1950s, Me and MaryAnn tells the tales of two rather naughty little girls and the freedom children had then. For adults, it will evoke nostalgia for that happier time.